August and September this year were the most hectic months of this year and I am sorry you did not get to hear from me as often. However, I did finish Forbidden Elemental and I successfully survived Comic-Con Africa 2018.

I took a brief hiatus afterwards and, for a short while, the question of "what's next" hovered menacingly over my head. Once I got over the "I finished my trilogy" feeling, I realised there is nothing to worry about, as I still have three more Elemental Short Stories I am working on, one of which I am hoping to release this year still.

Next on my release list is my dystopian fantasy Resilient, which I have already started. This is to give me a small break from the Elemental Saga before I dive back into the world of the Life Planets of the Milky Way. There are five more trilogies on the cards for the Elemental Saga, first of which will most likely play out on the planet Pud.

All in all, you have loads of new books to look forward to. One more new one this year. Two more short stories during the beginning of 2019, the dystopian fantasy, and then onward to the realms of Elves, Witches, Dwarves, and who knows what other species I will introduce you to.

This long-awaited conclusion to the Elemental Trilogy is finally complete. It released on the 14th of September at Comic-Con Africa 2018 and I printed just 60 paperbacks for the event, which I sold signed, stamped, and numbered. Those of you who have read the first two books will be familiar with Maia's Soul Dragon Midnight. Some of you will also know the Ice Dragon Shard, or recall the Plains Dragon Silverwing. Well, in Forbidden Elemental, dragons play a much bigger role and it isn't just Maia and the dragon riders of Thala Yll that make use of their strength and cunning. So, if it is dragons you are after, or even adventure, journeys of discovery, battles against all odds, unexpected plot twists, seeing in a new era, and simply a good read, then dive right in.

Dragons, Elves, and Magic. What more could you want from a fantasy trilogy?

Two battles are behind them and now the true war with the Vampyres is about to start. Elveron will succumb unless the Prime Elementals can become as one.

Maia deserts her people to find Blaid, for only as one will they have the power to defeat the Vampyres amassing at Greystone. It is Forbidden for them to be together and yet their connection is all that stands between victory and eternal defeat. With her dragon, Midnight, Maia sets off on a journey that will change the future for everyone.

Lord Longshadow, the Lord Regent, invokes the Rule of Kings and travels to every country of Greater Grildor. He needs the Lords to pledge their armies. Jaik Longshadow rules in his father’s stead and faces the greatest test of his life, while Aaron Nightingale, believing he is the reason Maia left, races across Grildor to find her.

The arrival of winter means the Vampyres will be less active. Amid snow and ice, it is time for Elveron to prepare. But the Vampyres have a different agenda and winter will no longer stop them. As desperation and fear takes hold, Maia understands that to save her people she needs a new plan.

Will Blaid help her? Will she have enough time?

“I fell in love with this world and its characters and became utterly invested in their trials and tribulations. Toni Cox has a wonderfully rich imagination and brings Elveron and the Elves, and Midnight the dragon, to glorious life. Utterly entrancing.” Elaina J. Davidson

Signed, stamped, and numbered paperbacks! I have 5 more copies available. They are R 300 each (or the $ equivalent) + postage. Mail me for your very own copy!

Please send me my paperback

Featured author of the month

Today, I want to bring your attention to a very special friend of mine who is not only a wonderful person but also an exceptional fantasy author. You ask "what does Toni read when she isn't writing?" Look no further. Fantasy, adventure, dragons, mystery, history. If ever I was going to recommend a fantasy author to you, this is it.

Elaina lives in magical Ireland after leaving the surrounds of magical Table Mountain at the southern tip of Africa. Having lived in both Ireland and New Zealand, she now realises Ireland's mists are close to perfection. When writing she puts into words her travels and dreams, because she believes there is inspiration in even the most outrageous tale. After studying Purchasing Management and working in the formal sector as a buyer, she chose to raise and home-school her three children. She started writing novels around 2002, moving from children's stories, poetry and short stories to concentrate on larger works. Previously published by Wild Wolf Publishing, Elaina is currently with Tirgearr Publishing and 13th Sign Publishing, and is also self-published. While her main body of work has been her Fantasy Series (Lore of Arcana, Lore of Reaume and Lore of Sanctum), she is a diverse writer and her credits include novels and shorter stories in the Contemporary, Humorous, Paranormal, Dystopian, Alternate History and Romantic genres, as well as a Non-fiction journal. Her novella Ancient Illumination has been translated into Spanish and Italian. Ireland's ancient past has influenced her writing, gifting her work a Celtic twist, while the majesty of New Zealand has led her to mountaintops and extraordinary vistas. The vibrancy of Africa has had much to do with the inspirational side of Elaina's work. The colours and diversity of nature itself fires her imagination. Come with her to places familiar and far, far away!

Another very special author friend of mine also recently released a new book on the 15th of September - also at Comic-Con 2018. If you are lucky, you may just be able to get some signed, stamped, and numbered paperbacks from the mother of creeps, Sian B. Claven, as well.

This is a Watcher Diary. If found, do not read.

This isn't technically a new release as it came out in June already, but I only managed to get my hands on it during Comic-Con. I have the first two books and have been waiting for the third to complete the trilogy. If you are looking for a new author to read, why not give Hinesh Vithal a try?

Have you ever had the feeling that your life is not headed in the direction you want? If so, have you identified the changes that are needed? What if opportunities are constantly presenting themselves and continue to do so until you take a chance? Will you summon the courage and face adversity head-on, or will you continue to cower from the inevitable? Get ready to take a leap and break through your comfort zone! Time has passed and yet the unease caused by past chaos still reverberates across the park. Cries of guidance and leadership echo through the land yet fear bubbles through cracks reviously unseen. New direction is needed and once again change is beckoning with burning friction. Niol, the son of Panthera, has the world on his shoulders as the eyes of expectation fall upon him. A responsibility that he did not ask for is now being thrust upon him, forcing him to consider his true purpose and place in the park. Philosophical considerations are cast aside as he is falsely accused of murder and unexpectedly forced to flee. Fighting for survival with the purpose of clearing his name, Niol’s journey twists and turns into a haunted maze of past memories, a blooming love story and a conspiracy targeted at bringing down the park once and for all! Are you ready to join Niol and embrace the unknown? www.nationalparktrilogy.com

To finish off this month's newsletter, I thought I'd share some of the pics from Comic-Con with you. A very special thank you to everyone who bought my books during the weekend. 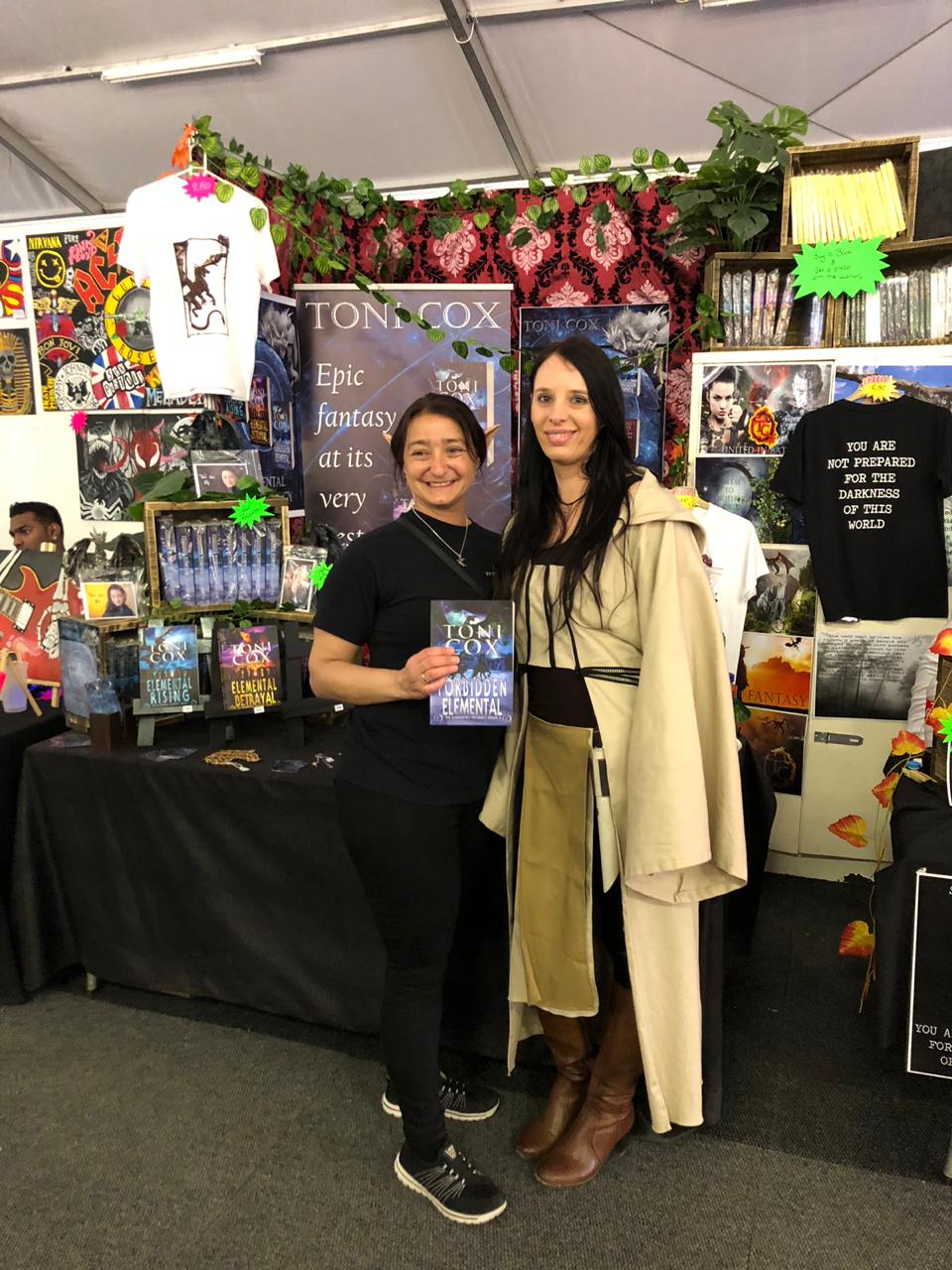 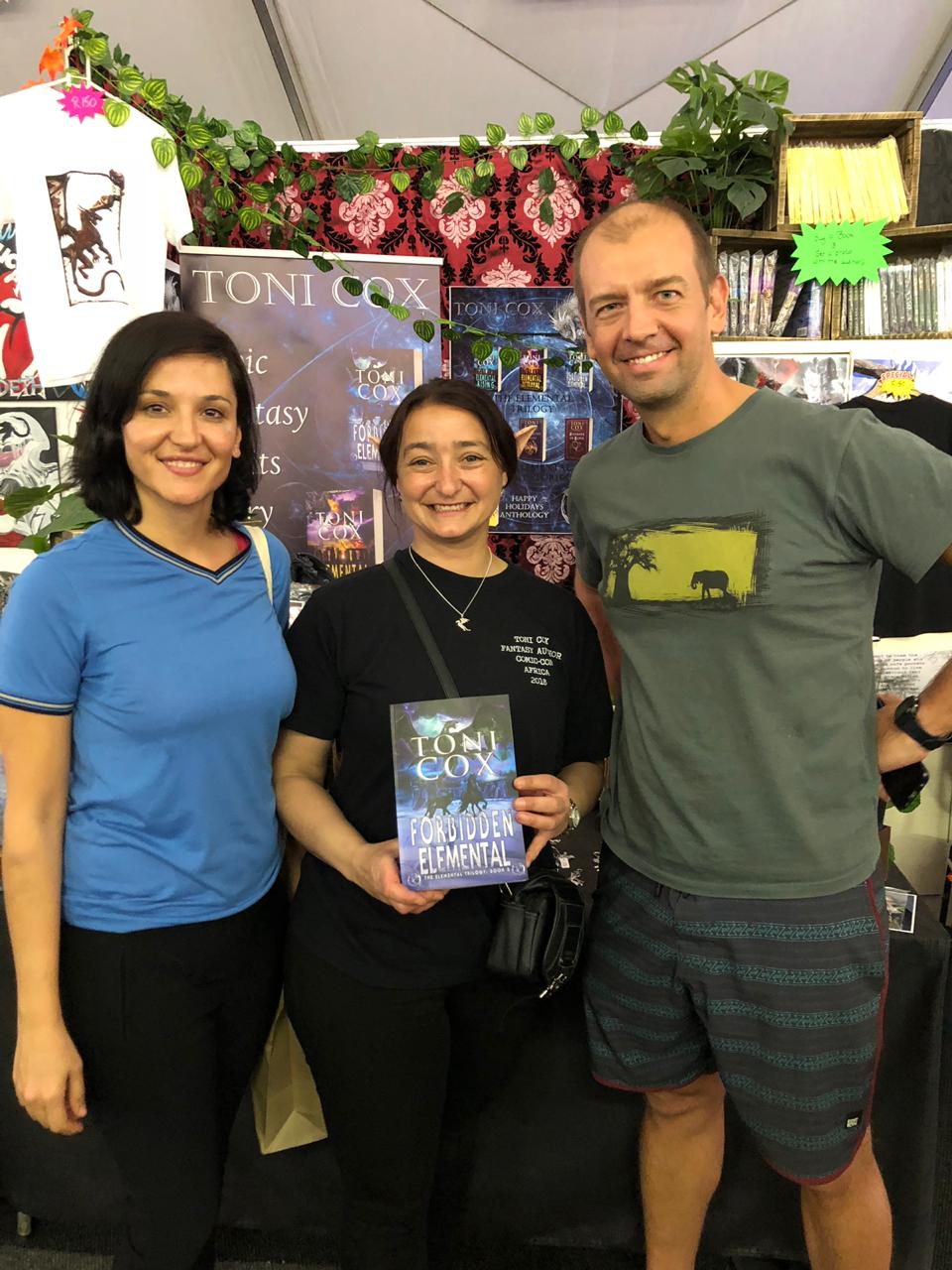 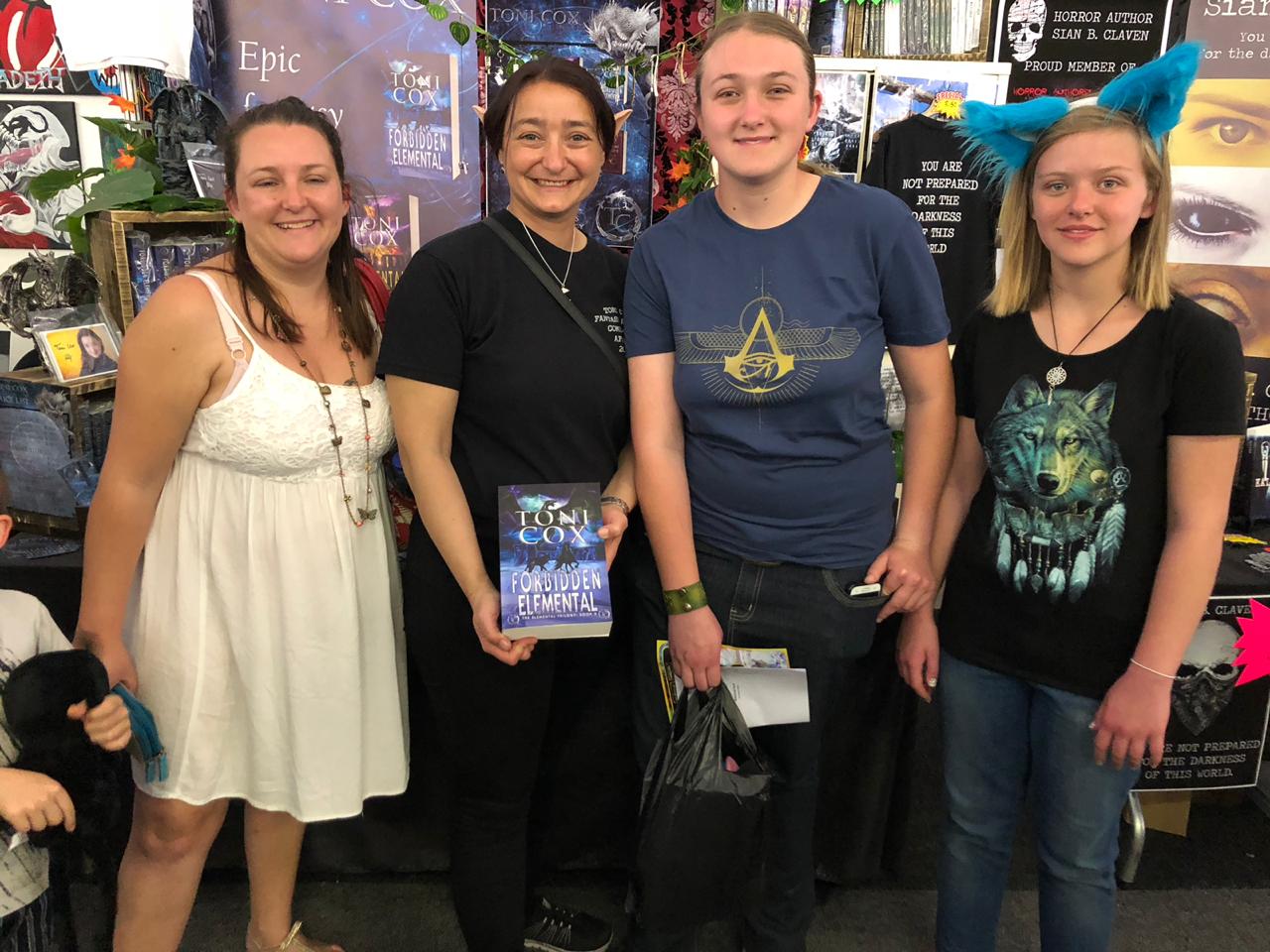 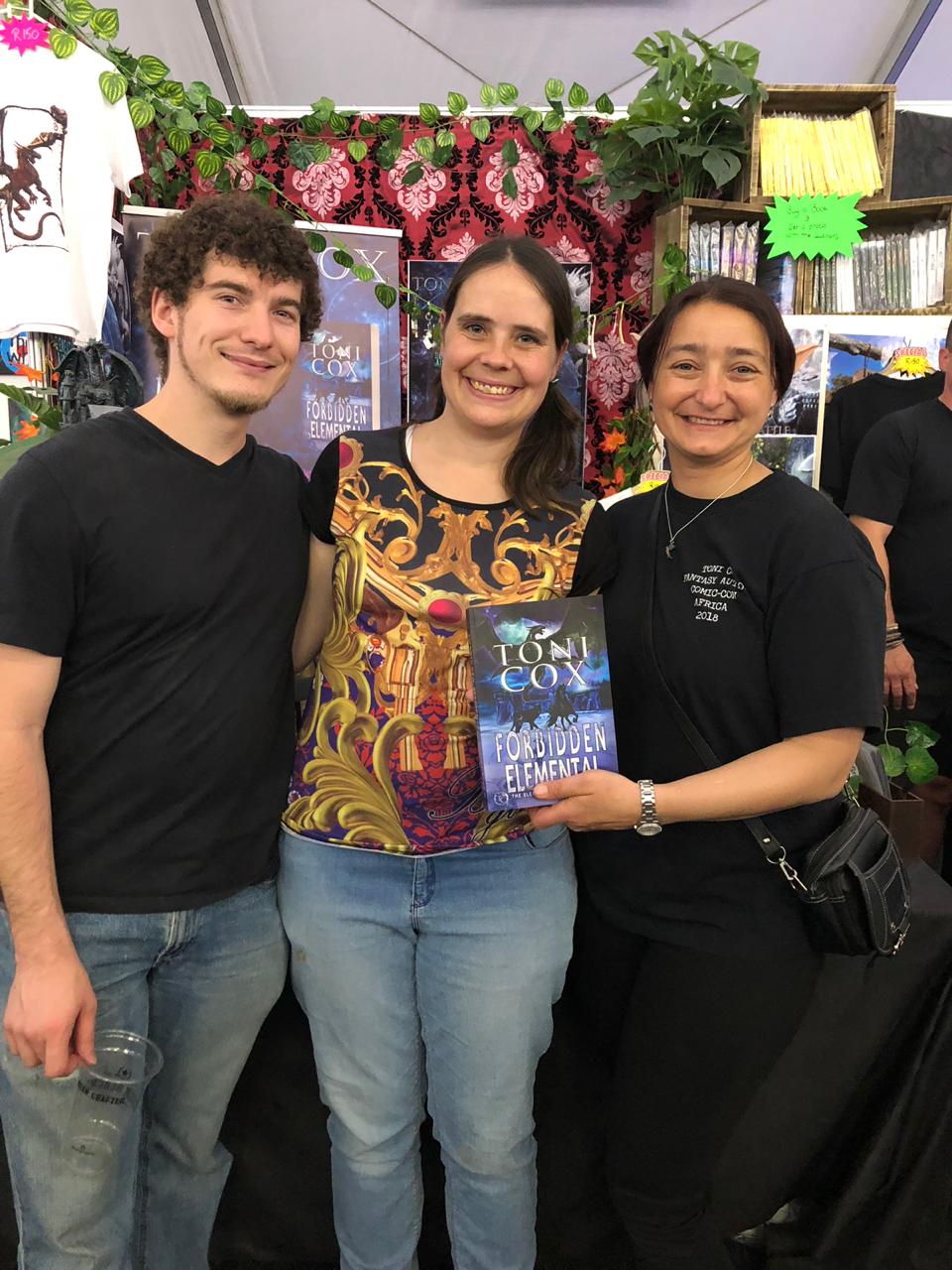 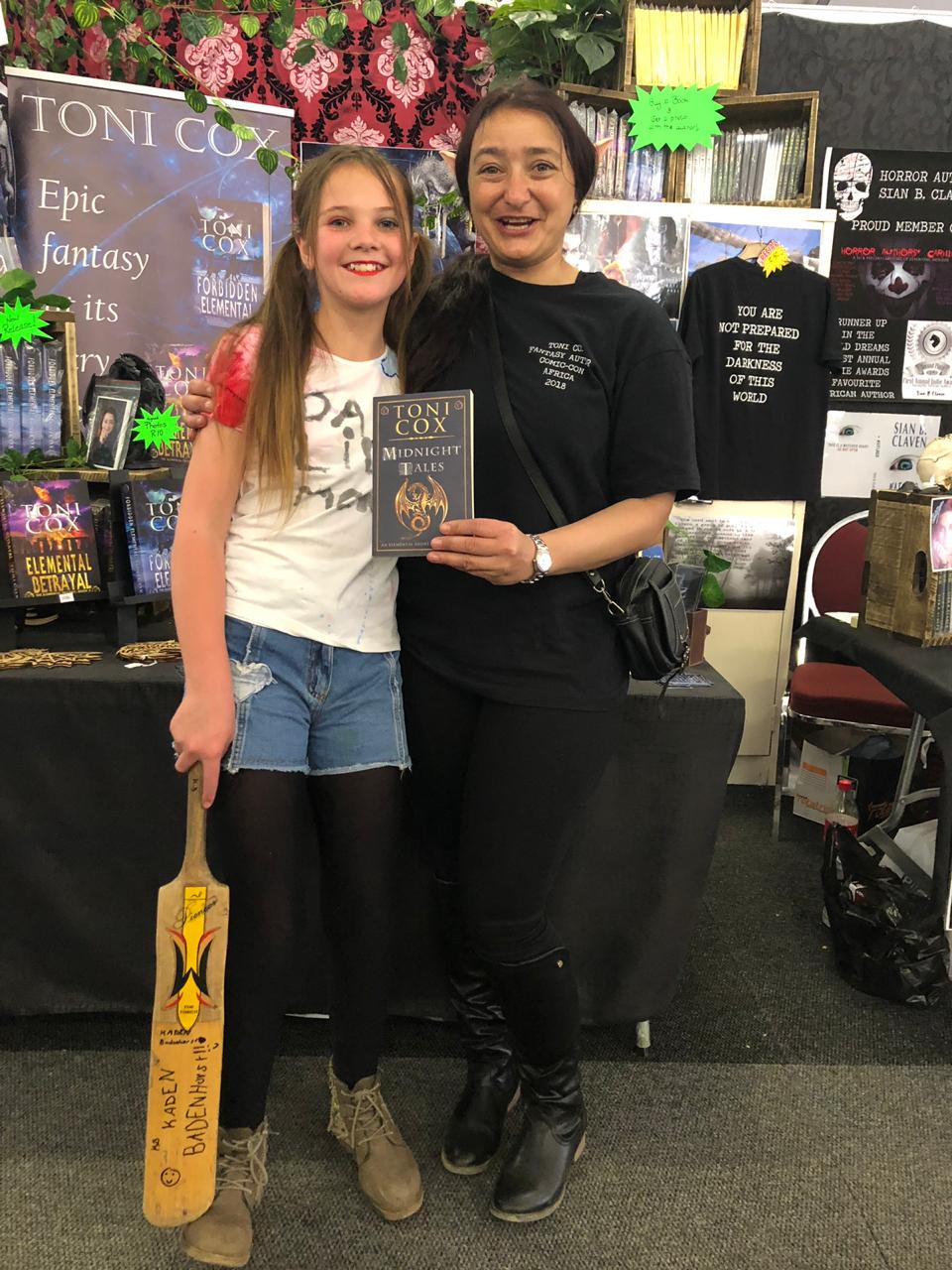 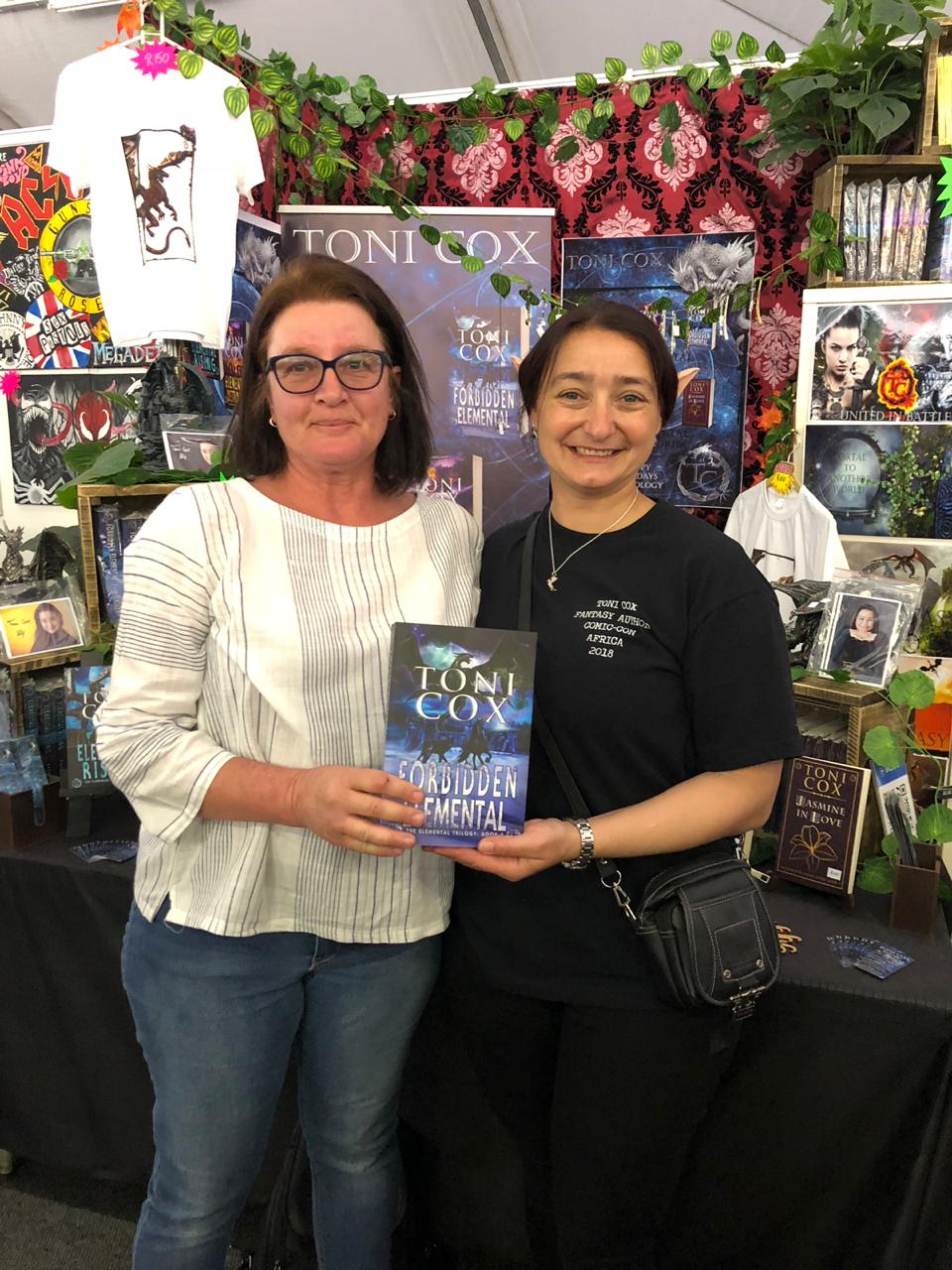 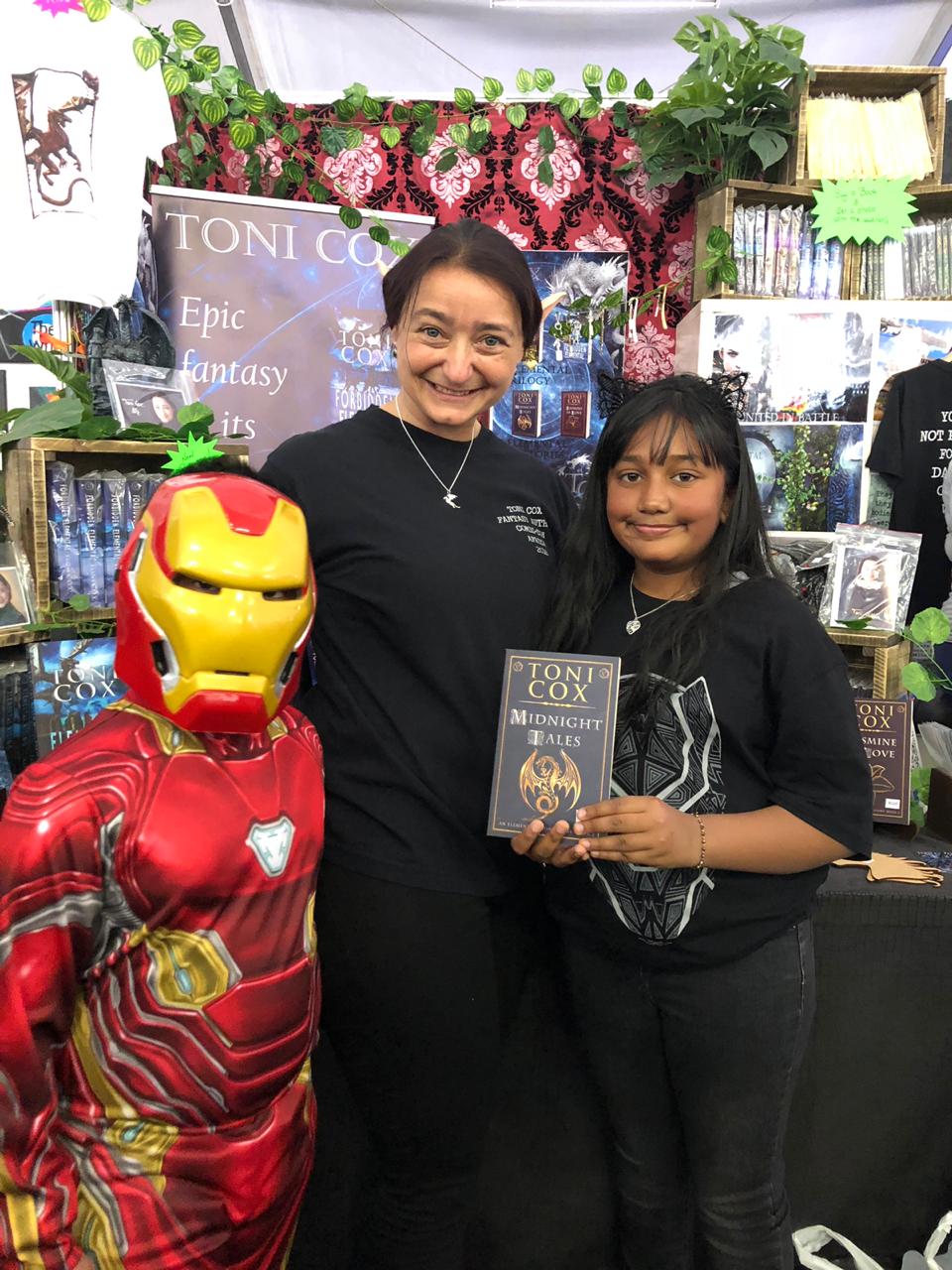 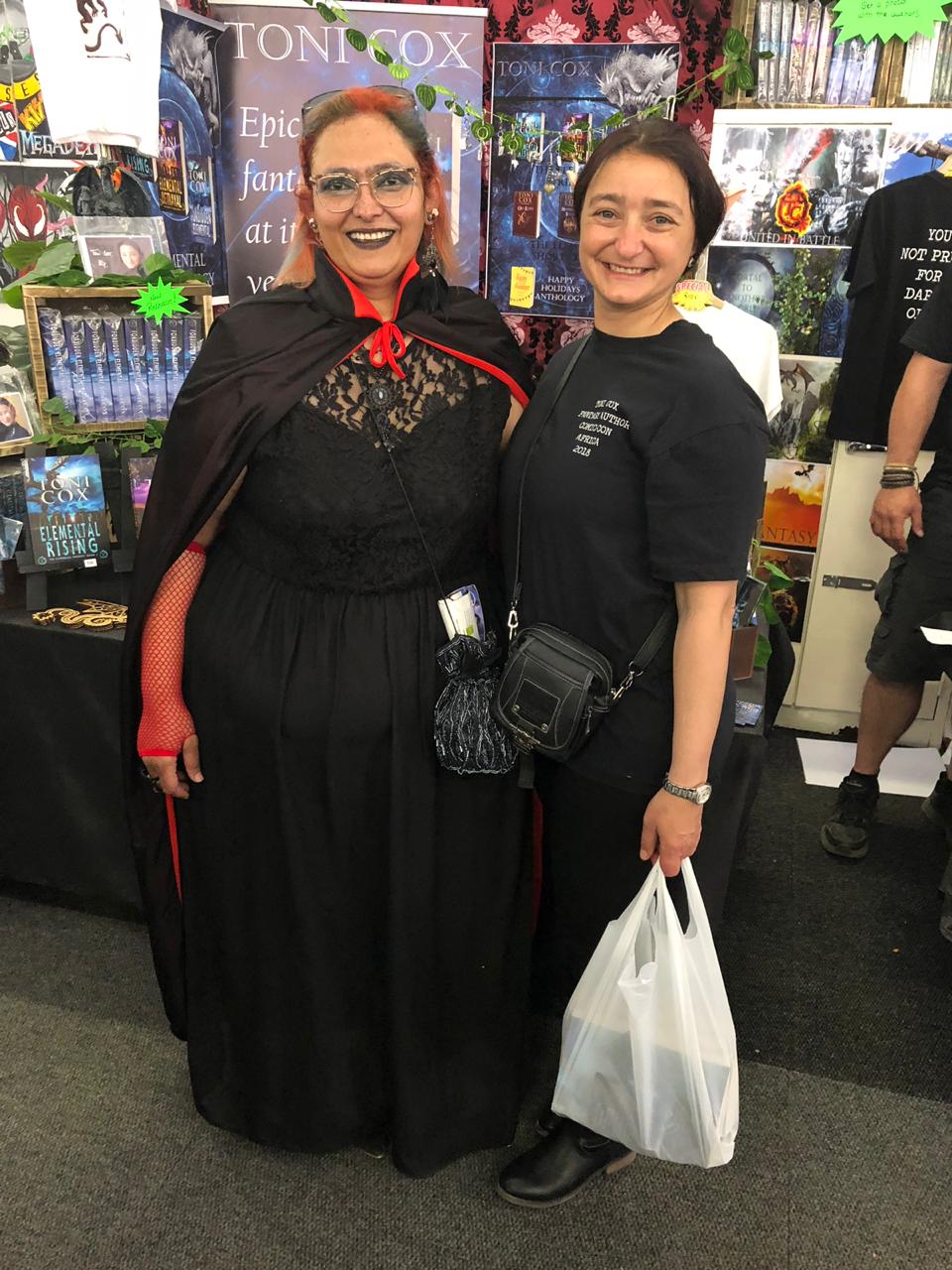 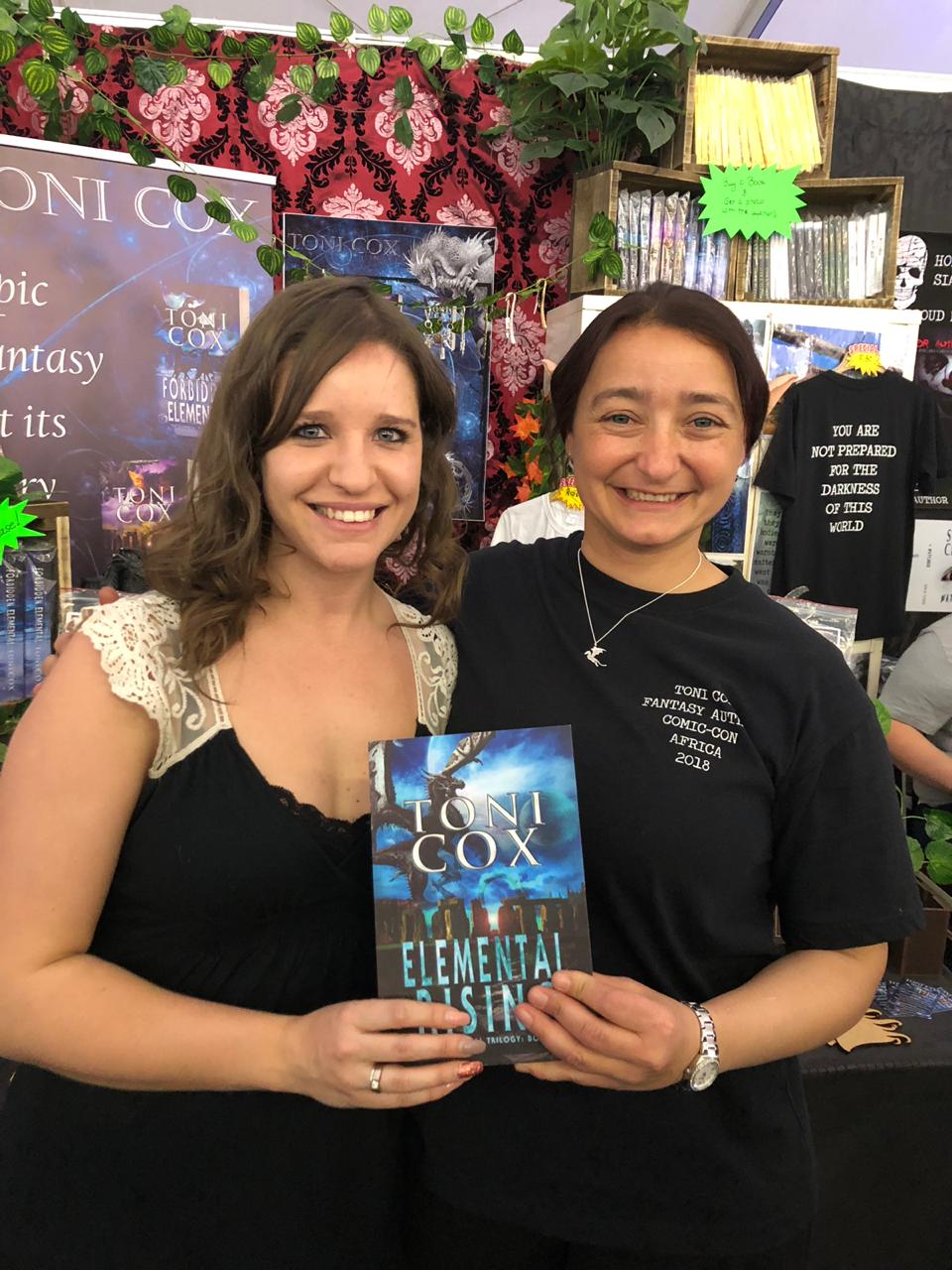 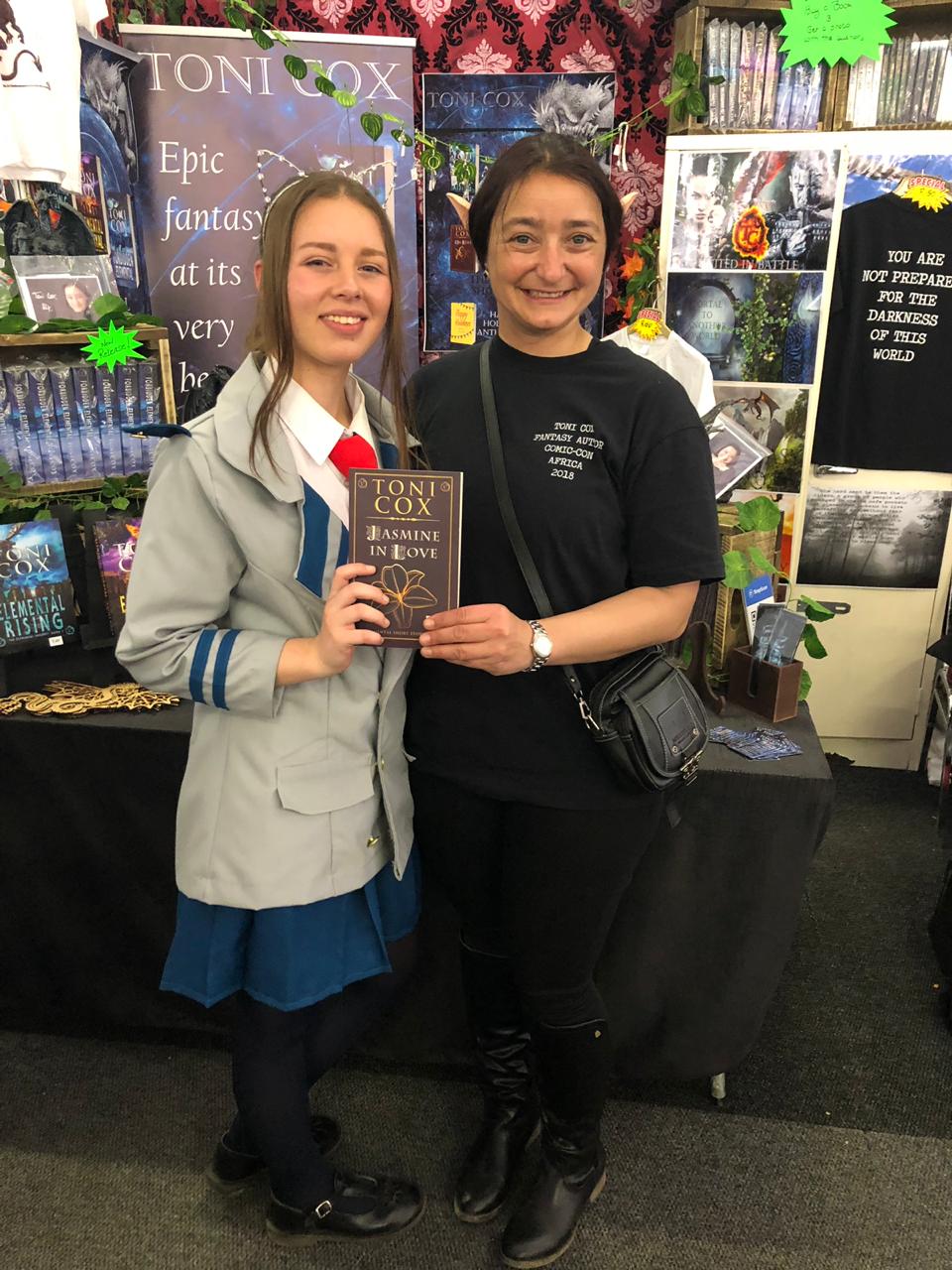 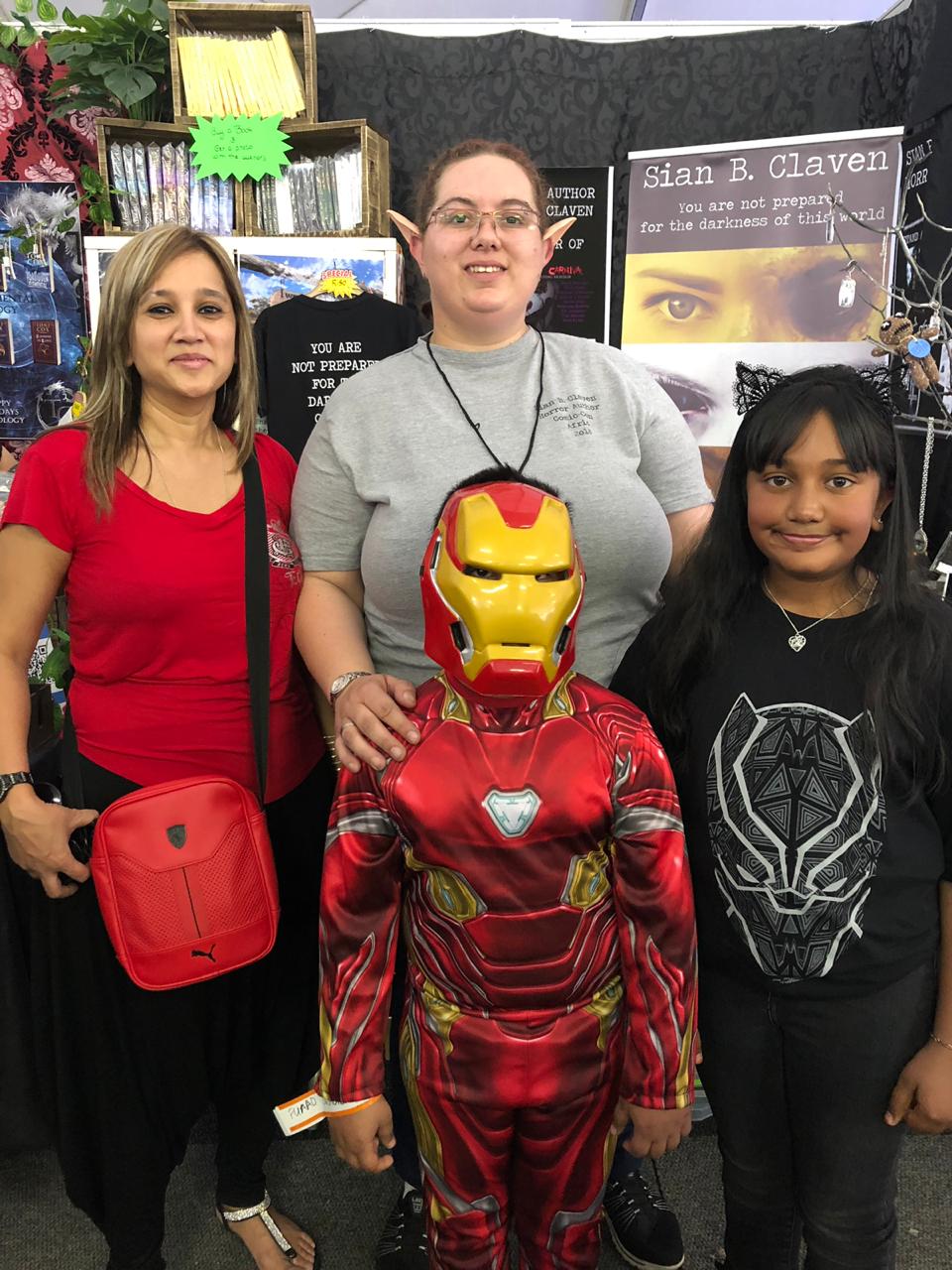 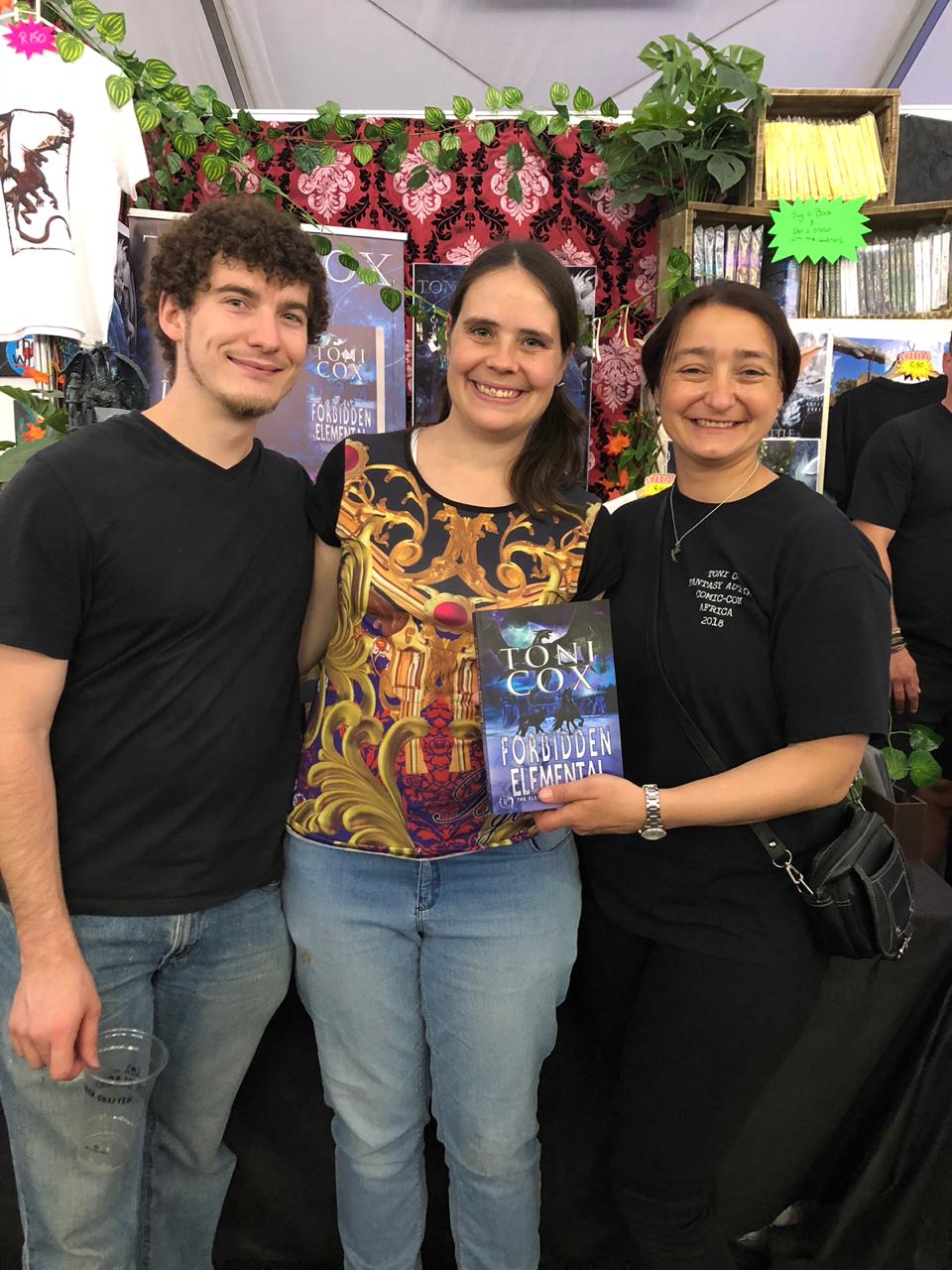 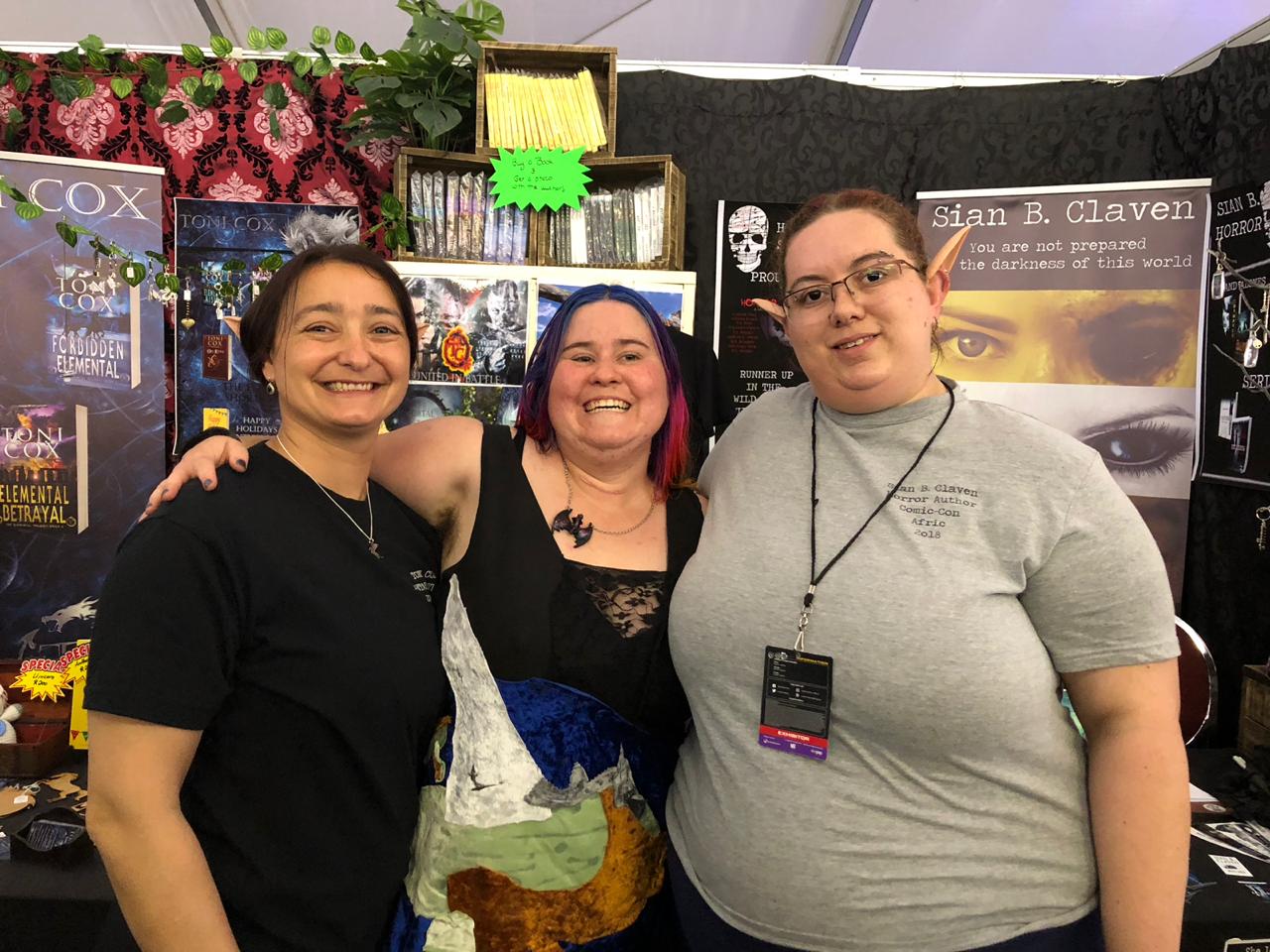 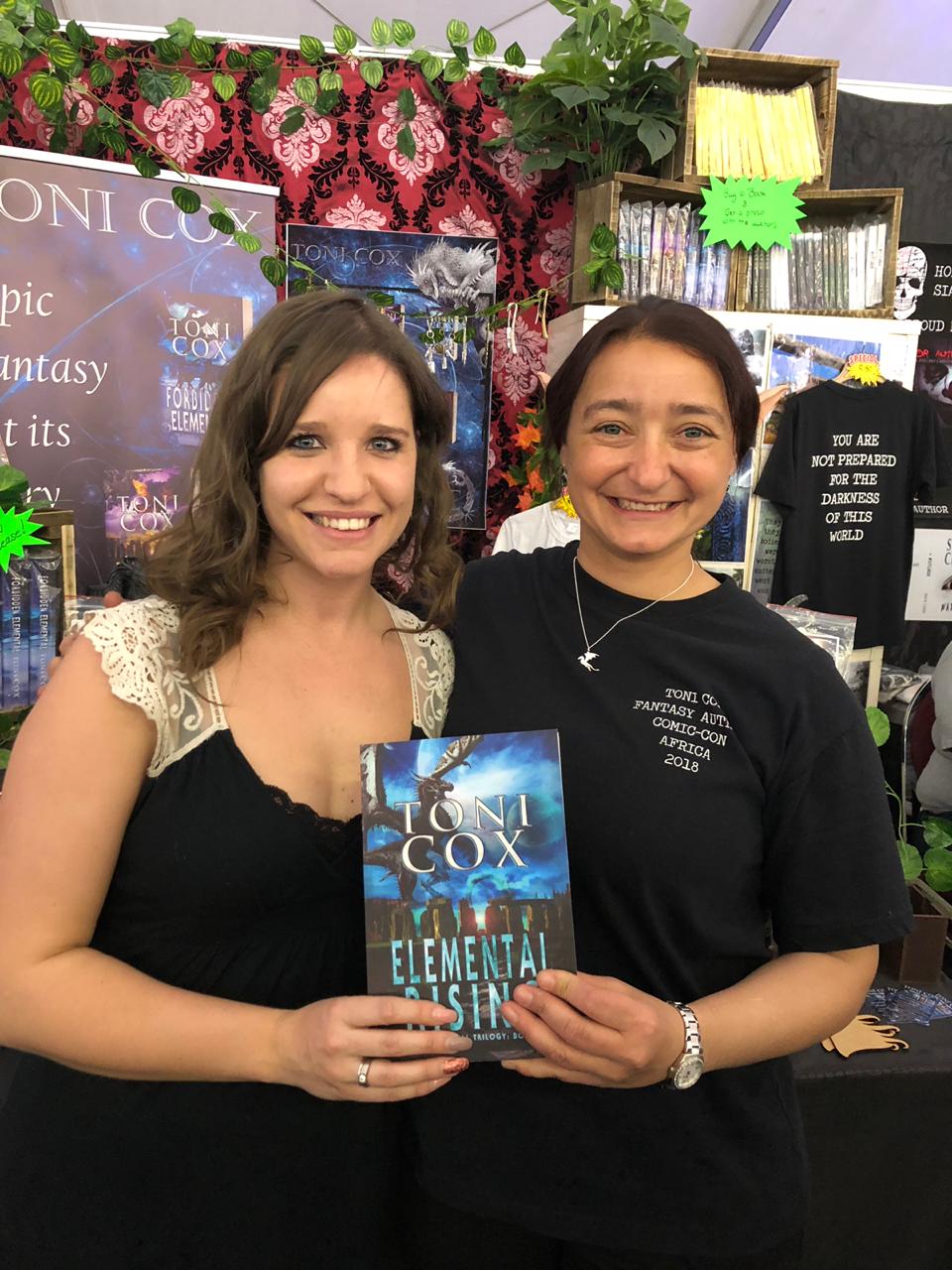 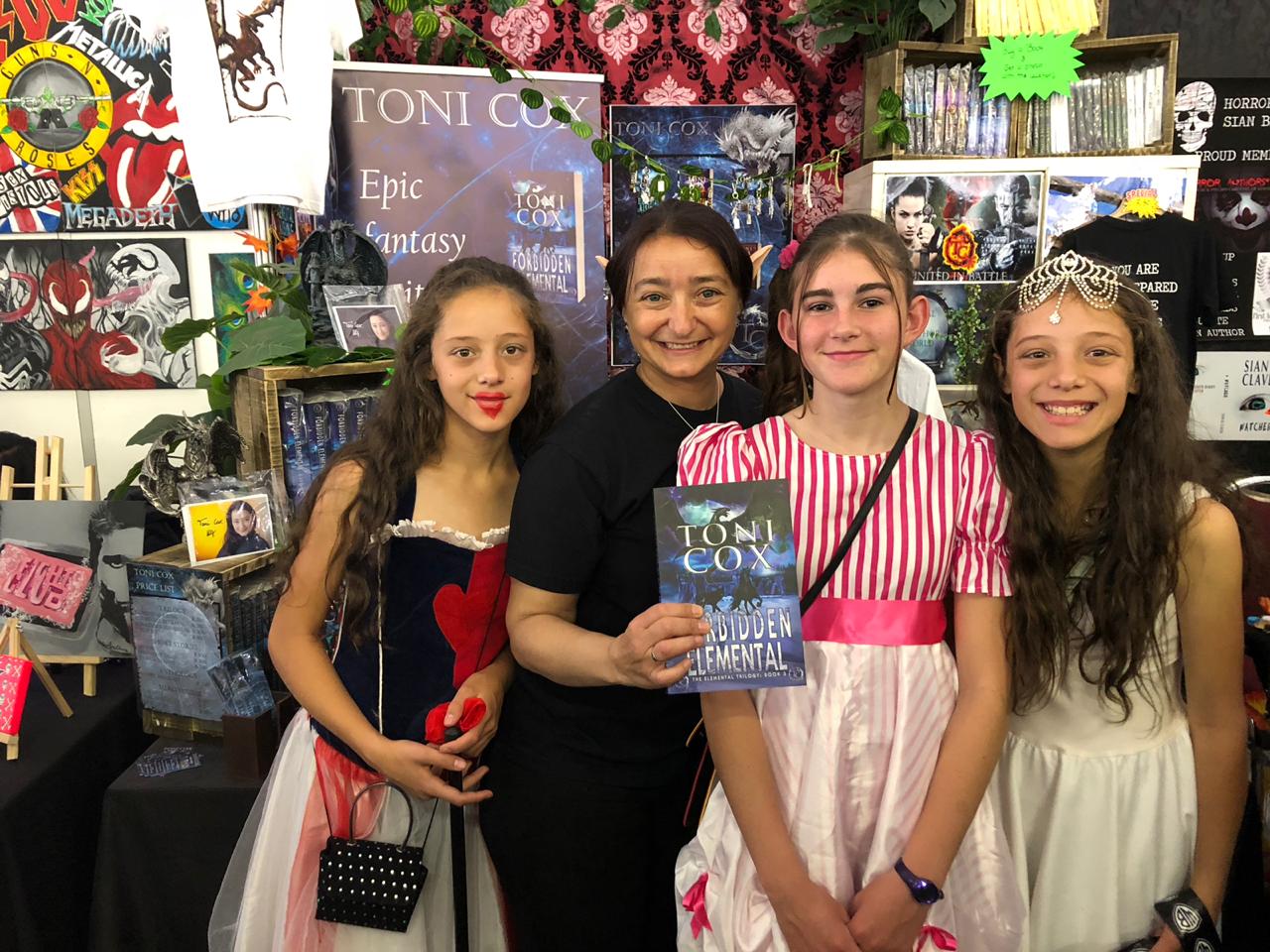 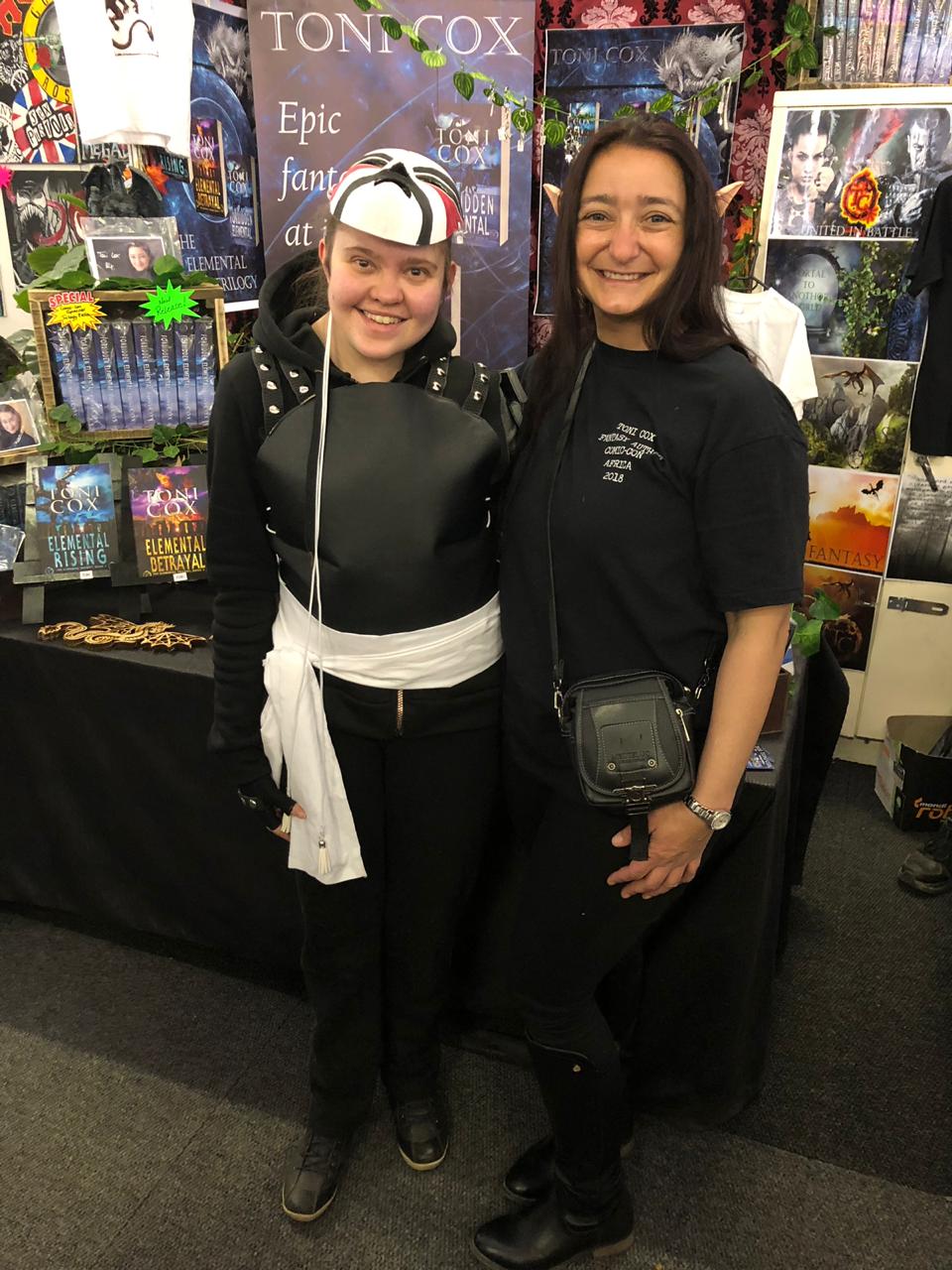 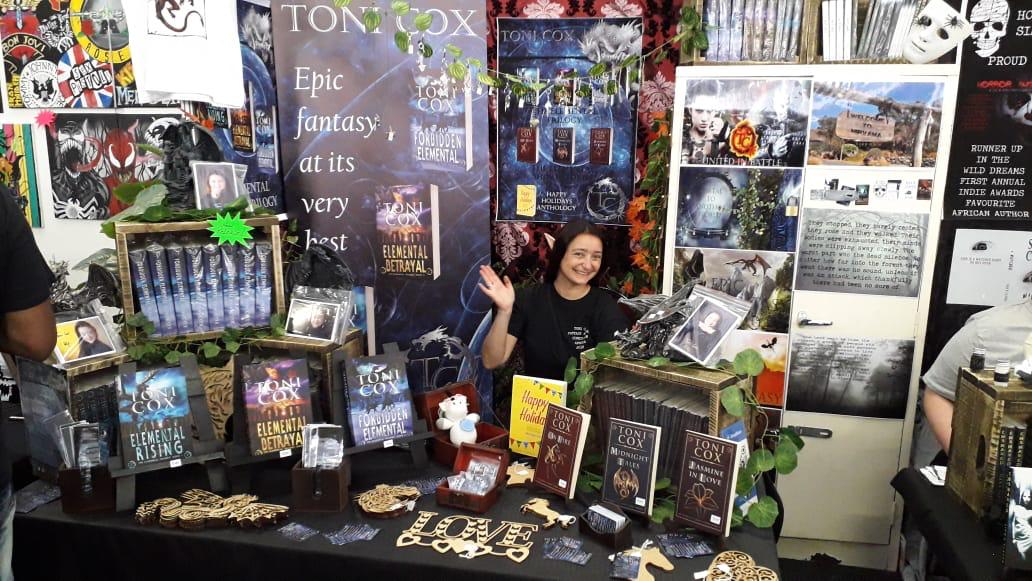 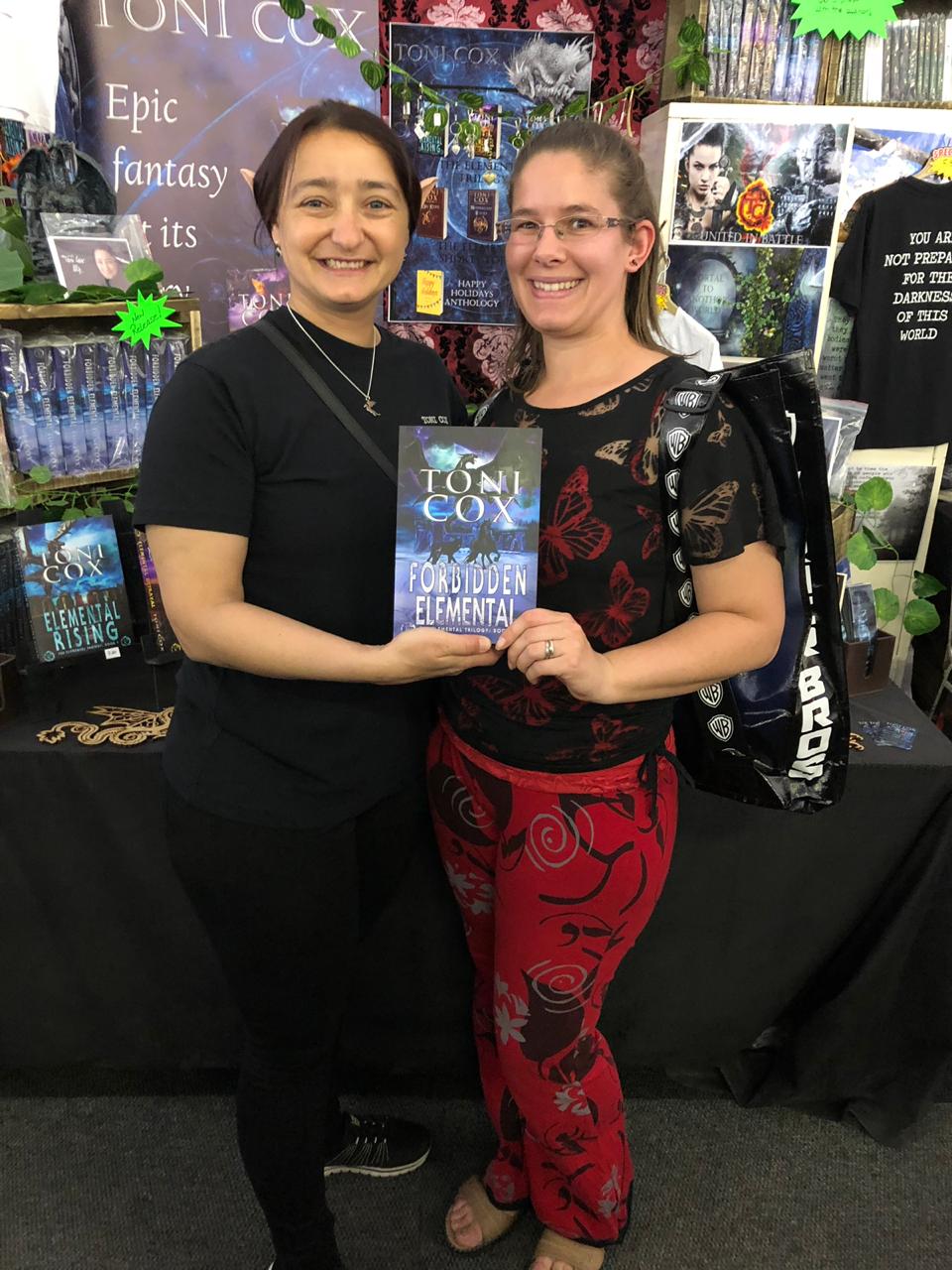 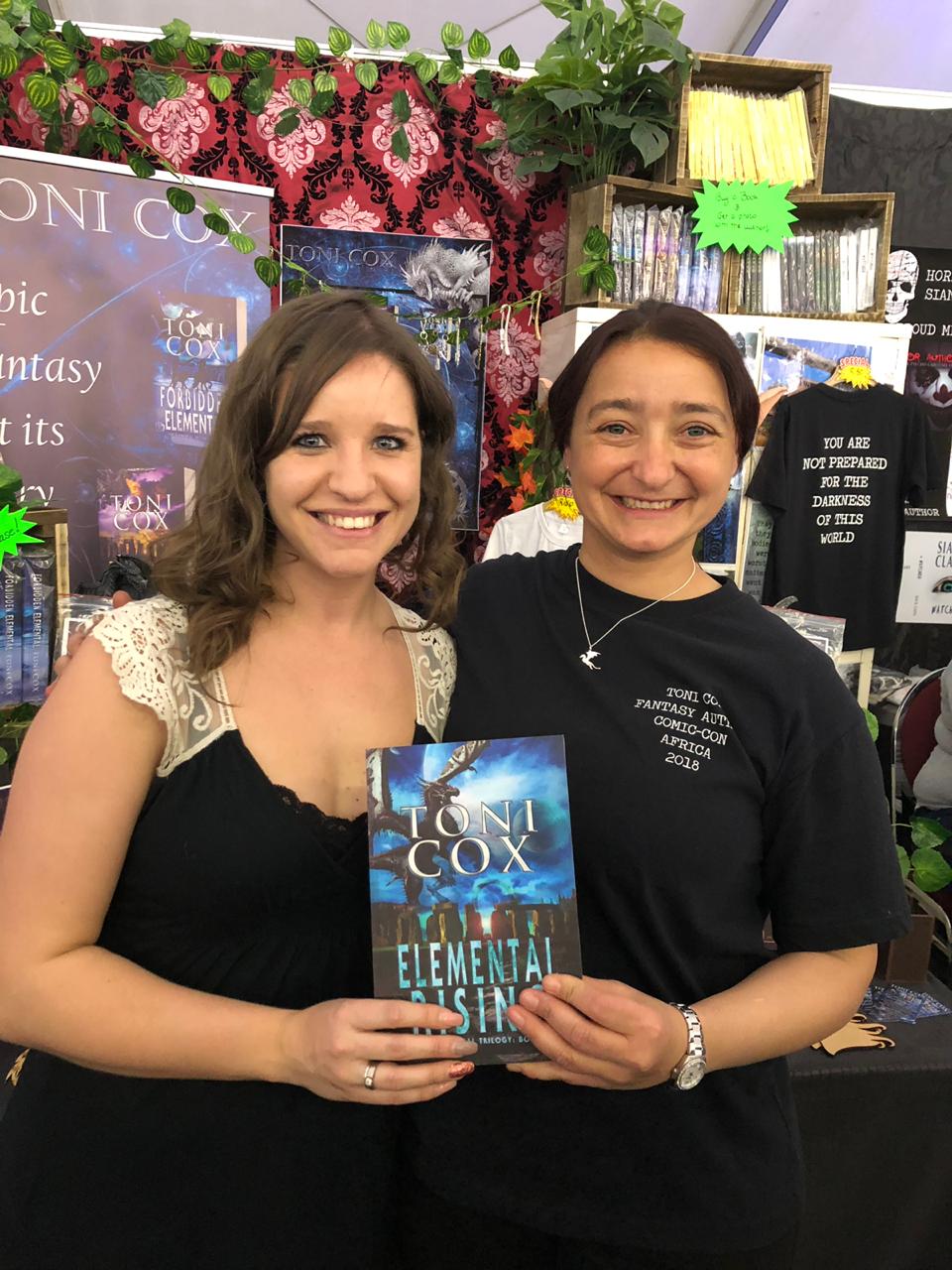 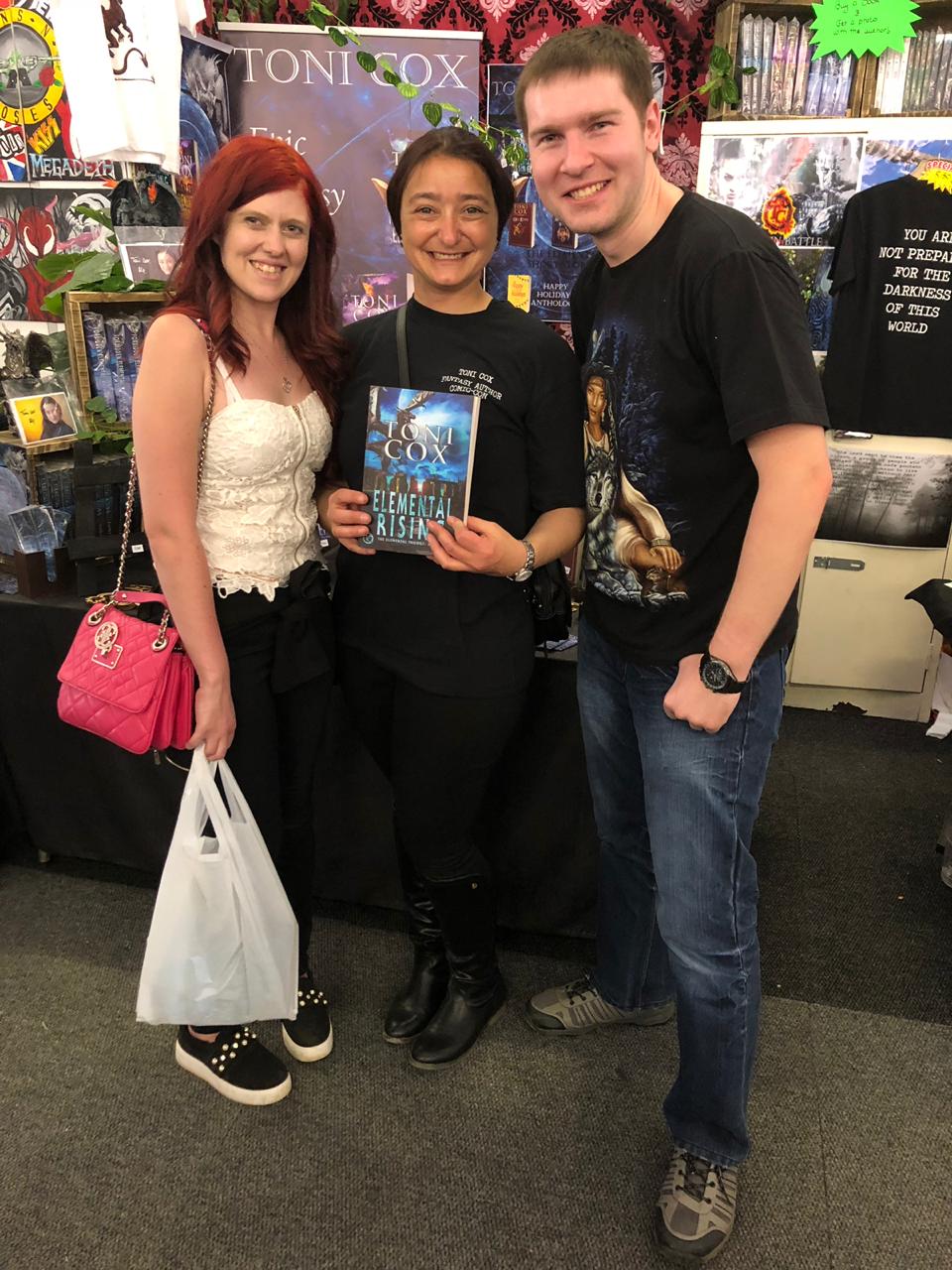 And my daughter, Jamie, got to cuddle with Ricky Whittle from The 100, while my son, Joshua, stood bodyguard.

Getting into the Halloween spirit

The Prophecy is Fulfilled